Are you looking for the best ghost towns in Maine? You’re in luck! This post was compiled with you in mind so that you can learn about the history of some of these long-lost towns in Maine.

From ghost towns located along the coast to ones that used to be military forts, the history throughout this state is truly abundant. Plus, some of them have a very interesting rise and fall, which you’ll truly enjoy learning about. While not every one of these towns can even still be visited, it’s still fun to learn about them.

You may not think of ghost towns when it comes to visiting Maine, but it is definitely something you don’t want to miss out on! Keep reading to learn more about the best ghost towns ME.

Fort William Henry was a town in colonial times that was used as a military fort. At one point, this was the largest fort in all of New England. Over the course of the next 100 years, multiple different forts were built and destroyed in the town. There are also a lot of speculations about the paranormal activity here due to the various wars that occurred in Fort William Henry.

The fort was officially decommissioned in the late 1750s and was abandoned by the early 1900s. Around this time, Fort William Henry was purchased to be used as a state park.

You can still visit the state park today, and parts of the fort tower and foundation have been rebuilt for you to visit!

Riceville may just be the most unique ghost town on this list. The town came into existence after the Shaw brothers built a tannery in the forest. They eventually sold it to the town’s namesake, James Rice.

The town itself was pretty quiet throughout its existence and was only home to just under 100 people. It is thought that the downfall of the town came when the tannery burned down in 1906. Some people think that the fire forced everyone to leave the town, and some think that cholera played a part, but by 1910, the town was completely abandoned.

If you want to explore this town for yourself to try and piece together what happened, you will have to take a drive into the woods to find the old town, but it is definitely worth a look!

READ NEXT  10 Most Loved Hotels in Maine 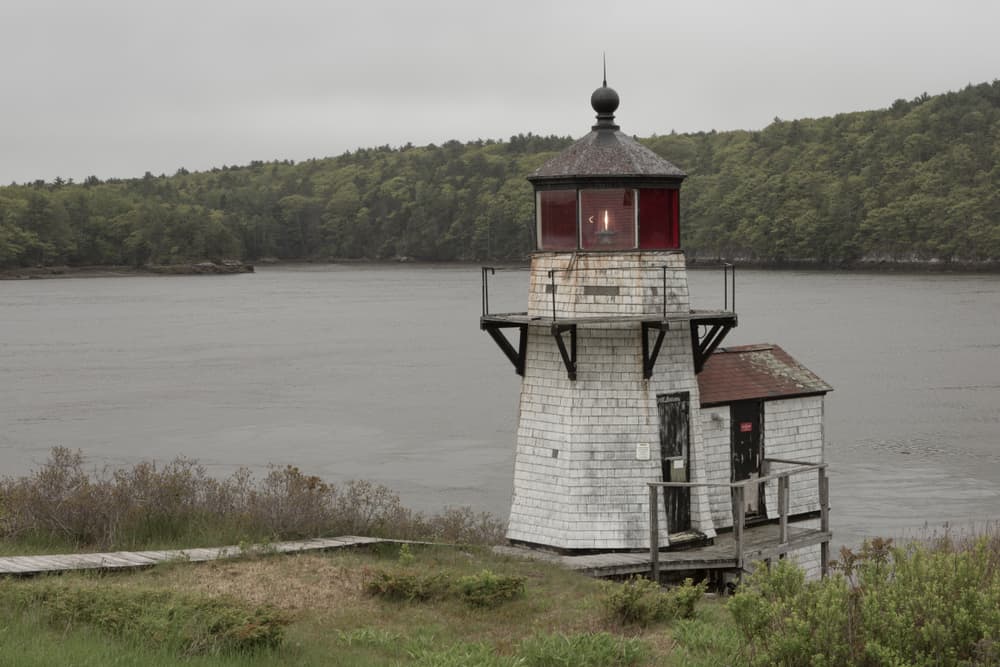 Perkins is one of the more beautiful ghost towns in Maine that you can visit. Located right on the Kennebec River, you can access the town by taking a ferry or by kayaking or canoeing.

There are a couple of different theories about what caused the residents to leave the town. Some think that pollution in the river drove people away from the town. Others think that they left as the state started to buy up some of the lands.

Dating back to the 1700s, there are actually 5 homes still standing in Perkins that you can visit. One of them was the home to a former mayor of the Massachusetts Militia. You can even peek through the windows to get a glimpse of what this town used to be like.

There are also many animals that you can see throughout the town as well as a cemetery. If you feel like staying for a little longer, there are even spots where you can camp out!

The story of Freeman is one of the more interesting of all the ghost towns in ME. Originally, Freeman was founded to give a home to the residents of Portland after Portland burned down during the American Revolution. In the late 1700s, Freeman turned into a bustling town filled with people and life.

The town’s main business was a rafting business, and you could find other normal things like churches, schools, and even a train station. However, in just about 100 years, Freeman when from a lively town to an almost completely abandoned one. The final nail in the coffin came in the early 1970s when the town was officially disincorporated.

Today, there are still some remnants of what used to be as well as an eerie cemetery that you can visit! 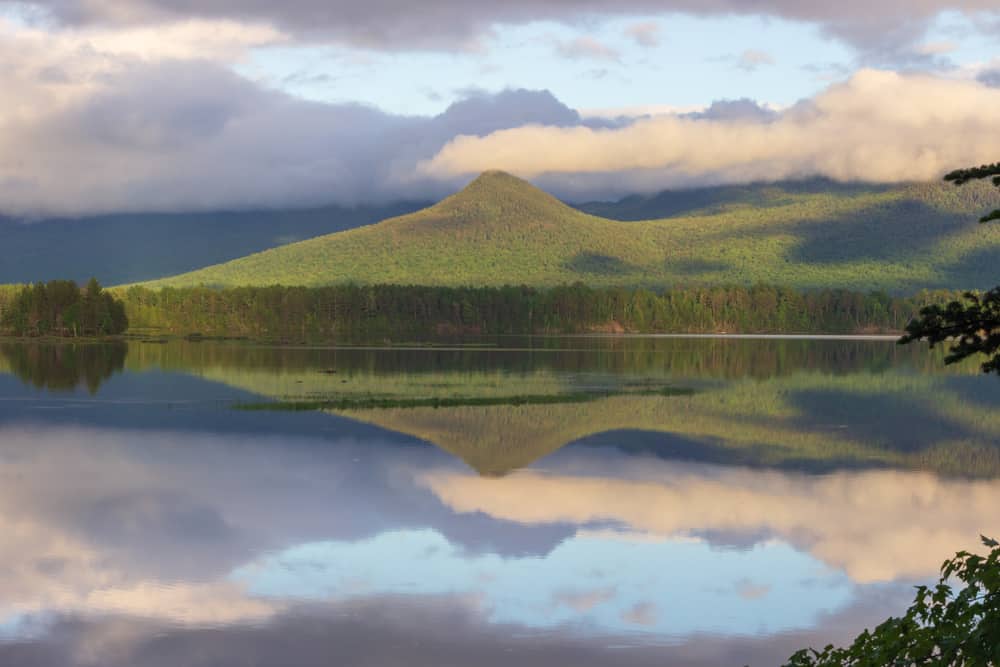 The history of Flagstaff is an interesting and unique one when it comes to Maine ghost towns. What once was a thriving town is now a quiet memory at the bottom of a lake.

Founded in the 1800s, Flagstaff was a popular place to settle due to the fertile soil found in the town and surrounding areas. It soon became a popular town filled with homes, stores, and kind-hearted people. However, the peaceful life in Flagstaff came to a halt in 1949.

Starting in the mid-1900s, the Central Maine Power Company started to buy up land in Flagstaff and the surrounding areas in order to create a dam for the Kennebec River. In 1948, the land started to be burned and cleared to make way for the waters.

Some residents came to agreements with the power company, and their homes and buildings were destroyed; others up and moved them to other towns. For those who did not agree to sell their property, all they could do was sit and wait for the flood waters to overtake their homes.

In 1949, the waters were diverted, and the town of Flagstaff was flooded, creating Flagstaff Lake. To this day, there are still the foundations and final remnants of a town that was. There are even people who have found pieces of what’s below and what was left behind when visiting Flagstaff Lake.

READ NEXT  8 Best Maine Campgrounds for Camping in Maine

Askwith, Maine, started out as a small town in the early 1800s. Initially, people settled here because of the great fishing, hunting, and the rich forest of timber. Soon, this small town became a popular town with a train station, churches, schools, and homes.

The timber industry was the main business in the town and offered great opportunities for lumberjacks and carpenters. However, all of that timber soon became depleted. By the mid-1890s, most of the timber was already cut down. This, combined with the emergence of mining towns in the nearby area, led to the demise of this town.

More and more people began leaving Askwith, and by 1930, there were only a few dozen people left in the town. Those few remaining residents left the town over the following years, and all that was left was the railroad.

Today, you can still find the trail the railroad was originally placed, but it is now an ATV trail instead of an active railroad! 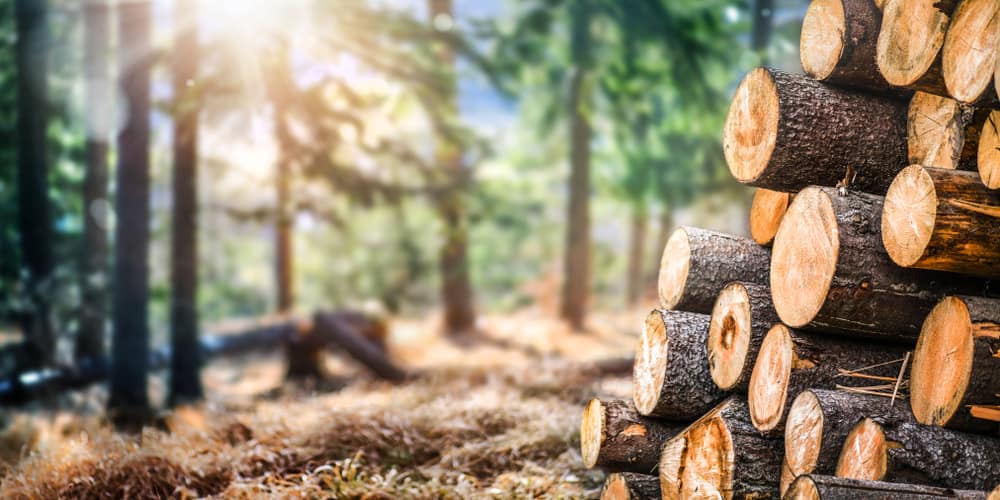 What once was a thriving logging community is now nothing but abandoned buildings and overgrown roads. The town of Davidson was founded in the early 1900s and was mainly invested in the logging industry.

There were many different businesses, including a log mill, throughout the town, and there was even a railway that went through Davidson. However, in 1931, this thriving town slowly started to slip away.

Not much is known about why people started leaving Davidson, but the town is now home to little more than the remnants of what used to be. There are foundations still standing for some of the buildings as well as some of the equipment that was once used by the residents.

Founded in the 1790s, Madrid transformed from a small town to a bustling community. Farming and the lumber industry put Madrid on the map, and it quickly became a thriving spot to move to. There was even gold found in the town in the mid-1800s.

At the height of its existence, Madrid was home to multiple different factories, seven schools, a railroad station, and more. Everything was looking up for the town until resources started to become scarce.

Eventually, residents started moving out of the town, and the slow decline of Madrid began. By 1959, the last school had closed, and in 2000, the town was officially disincorporated.

Today, you can still find some buildings standing, and there is even a museum that tells the story of the rise and fall of this town in what once was a schoolhouse!

READ NEXT  50+ Best Things to Do in Maine: Ultimate Maine Bucket List

The history of Ligonia Village is a unique and fascinating one. The town, which was primarily inhabited by Irish families, was originally filled with people working for the Portland Rolling Mills.

There was a railway connecting Ligonia Village to Portland, and there were many other shops and businesses that made up the town. However, a few different factors soon led to its abandonment.

As cars started to get more popular, the railway itself started to become less necessary. The Portland Rolling Mills company also started to face more competition in their industry which caused fewer jobs to be available. These factors led to residents moving away from Ligonia Village.

Today, most of the town has been taken over by the Calvary Cemetery and by oil companies. There is little left of the original town and those that inhabited it.

Did you enjoy learning about all the ghost towns in ME? We bet you did! Don’t forget to share this post with others who also are interested in this topic.