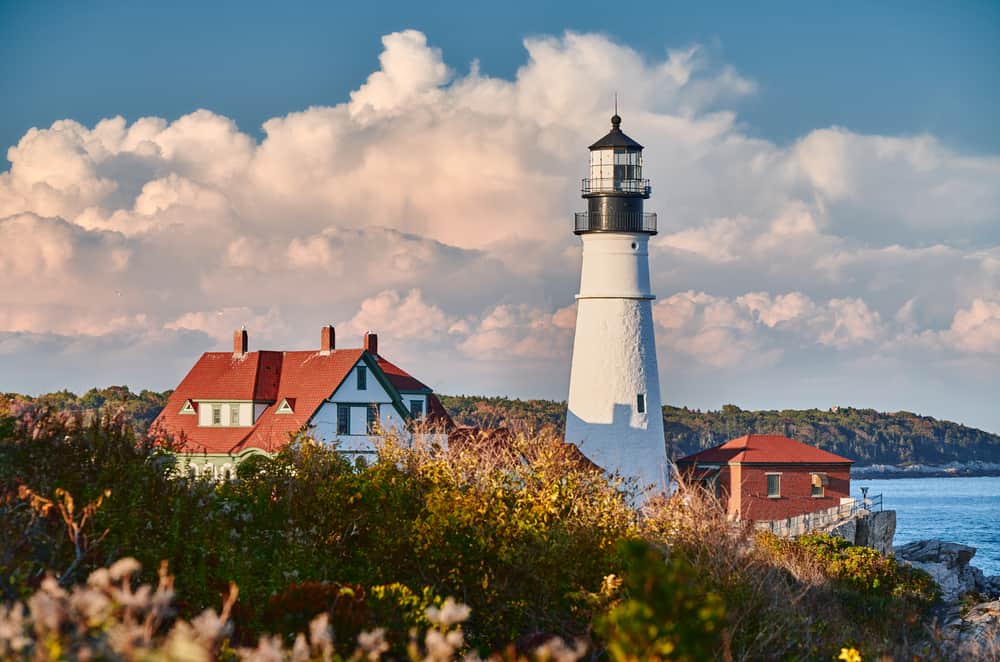 Planning a trip to Maine? I am willing to bet that lighthouses are one of the top items on your Maine bucket list; one of the “must-sees” on your Maine itinerary. Am I right? If so, this list has been made just for YOU! Lighthouse lovers unite: here are 10 spectacular lighthouses in Maine to add to your list.

These lighthouses stretch all the way across the Maine coastline (see map at the bottom of this page). The southernmost lighthouse, Cape Neddick Light, could be seen even on a day trip from Boston. The most northern and most eastern light, West Quoddy Head Lighthouse, is practically in Canada!

And this list of 10 Maine lighthouses only scratches the surface. There are a total of 65 throughout the state. So no matter where you are traveling in Maine, chances are there’s a stunning lighthouse within easy reach. 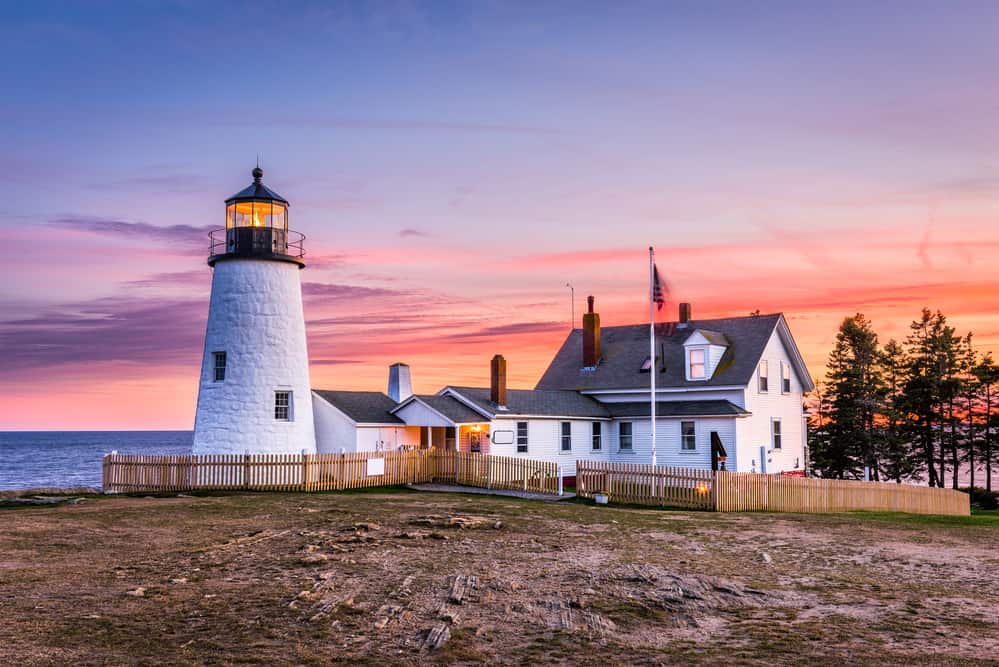 Pemaquid Point Lighthouse in Bristol, Maine is a picture postcard lighthouse with the lighthouse keeper’s house attached. Gazing out into the beautiful blue Atlantic, it’s easy to imagine being the keeper of this lighthouse and to have the enviable daunting task of safely guiding ships in the night. Under the lighthouse are rocks for climbing; there is an ice cream shop and giftshop in the building. 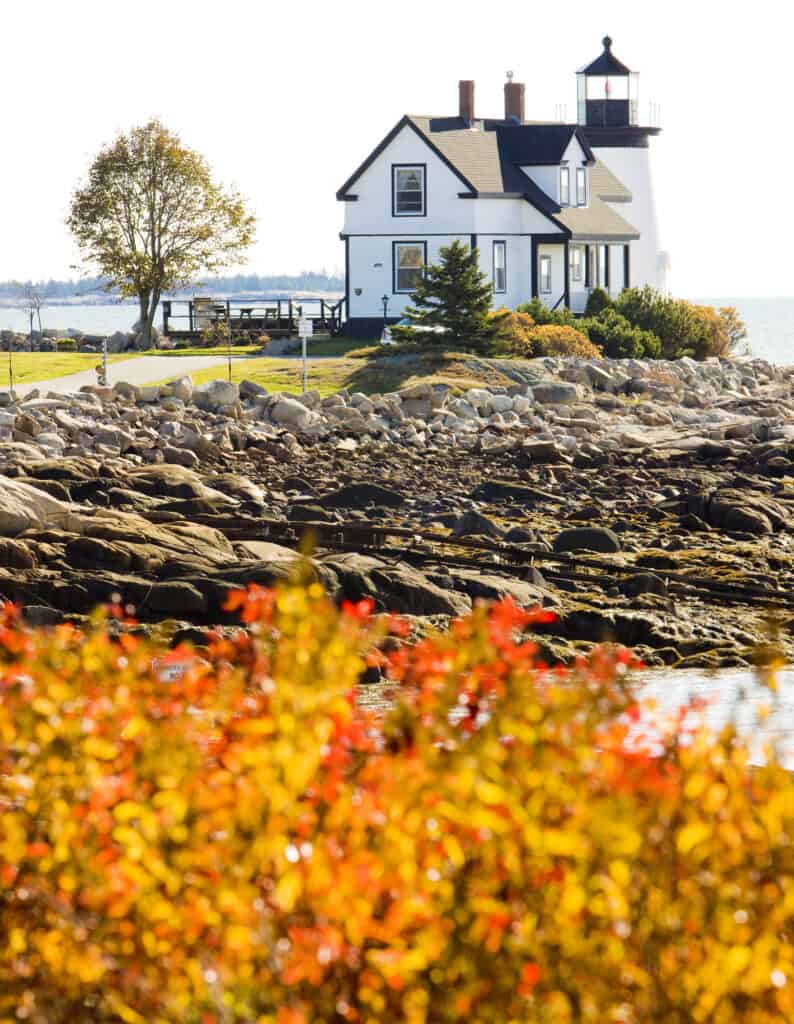 Prospect Harbor Lighthouse is located on the east side of the entrance of Prospect Harbor, Maine. It was originally built and began use in 1849 with Nathaniel Noyes as the first keeper of the lighthouse.

Over the years the light was changed to blink white every 60 seconds, to blinking red and white  every 30 seconds. The lighthouse’s last keeper served until 1934, when the light became automated. Ghost stories about this (and many other lighthouses) abound. 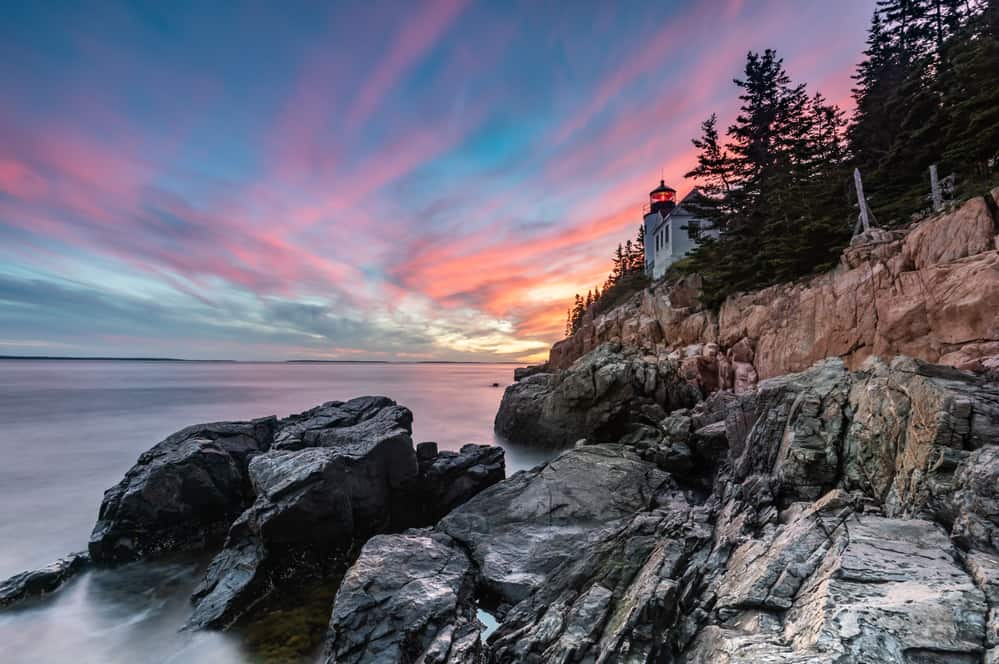 Nothing screams MAINE like this lighthouse right here. Built in 1858, this lighthouse stands 56 feet above sea level. There is a lighthouse keeper’s house that is still in basically the same condition (with a 10 foot addition added in 1900) as when it was originally built. 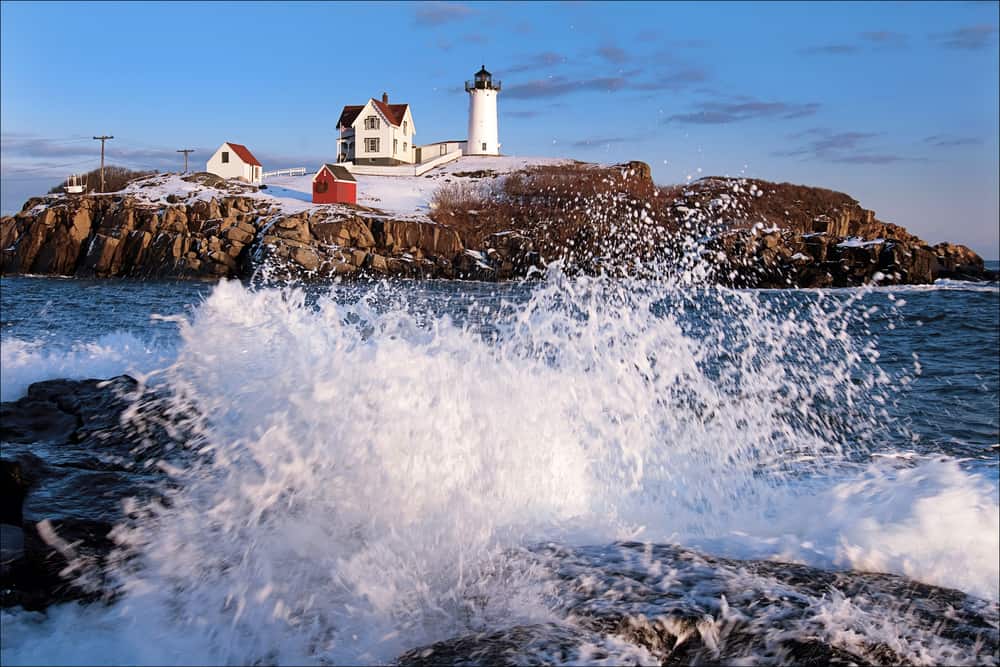 “Nubble Lighthouse” is considered one of the most photographed lighthouse in the United States. It is located in York, Maine. Easy to access (located on an island in the southernmost part of Maine) Nubble lighthouse has ample parking as well as a gift shop. Sitting on the rocks and gazing into the ocean and photographing this beautiful lighthouse is an experience you will always remember.

READ NEXT  10 Coastal Towns in Maine That are Hidden Gems 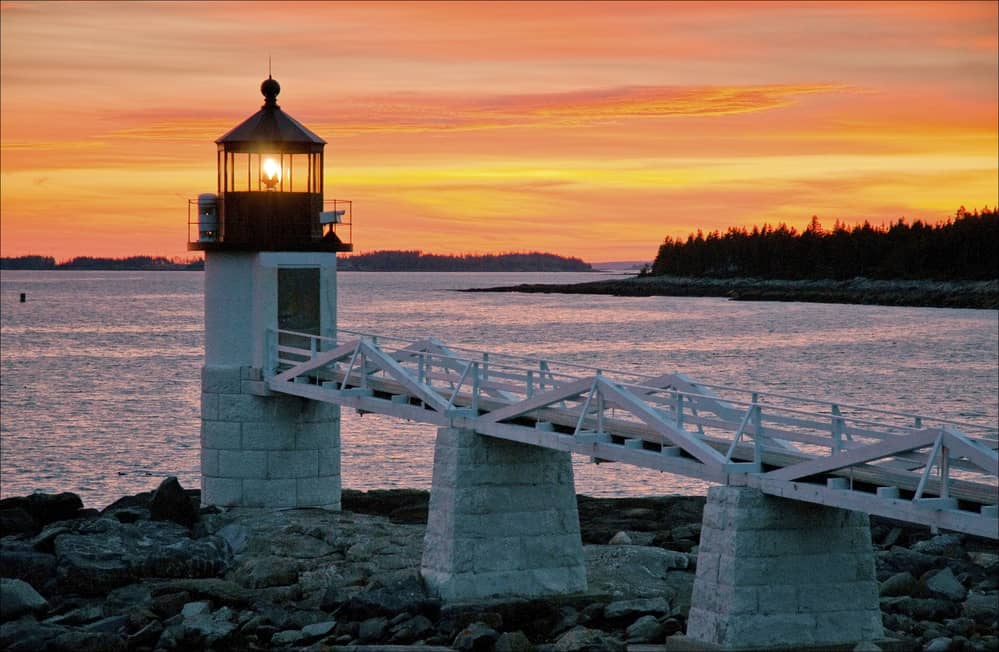 The Marshall Point Lighthouse is a working lighthouse, still guiding ships along the Maine coast gulf at the entrance to the St. George River. The property includes the tower itself, as well as the restored Keeper’s house built in the 1880s. In the Keeper’s house you will find a museum filled with exhibits, photographs and documents detailing the history of the lighthouse and the peninsula itself. 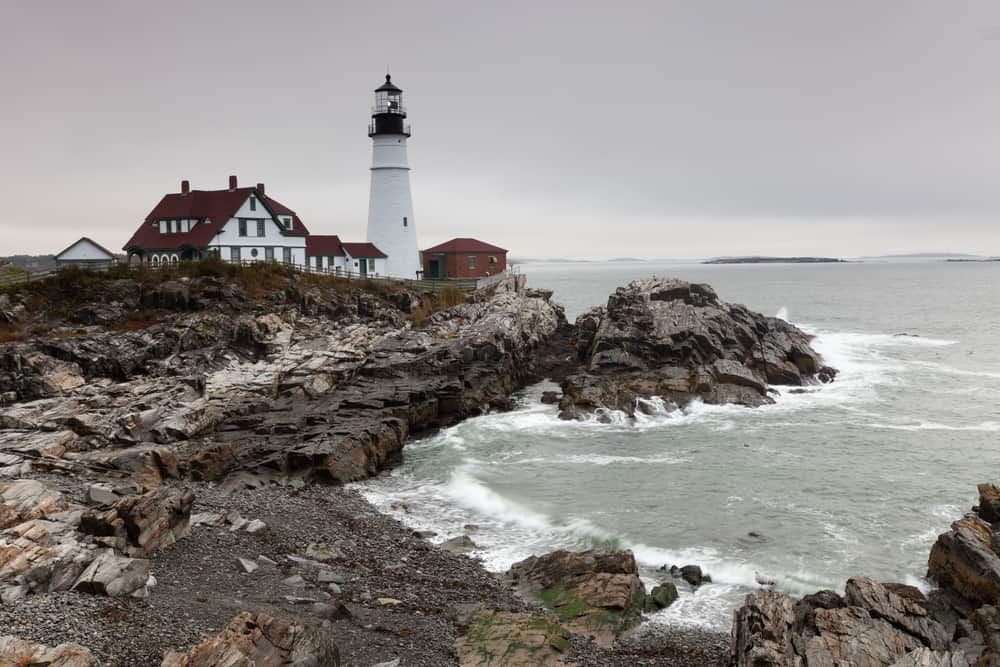 The Portland Head Lighthouse, located at Cape Elizabeth in Portland, is Maine’s oldest lighthouse. The lightkeeper’s former house is now the home of an award-winning museum with numerous fascinating displays and lighthouse lenses.

Interesting fact: on Christmas Eve 1886 there was an unexplained accident when the ship “Annie C. Maguire” hit the ledge outside of the lighthouse.  Adjacent to the lighthouse is a picnic area, hiking trails, recreation opportunities and historic buildings. But best of all are the many fantastic views of the ocean! 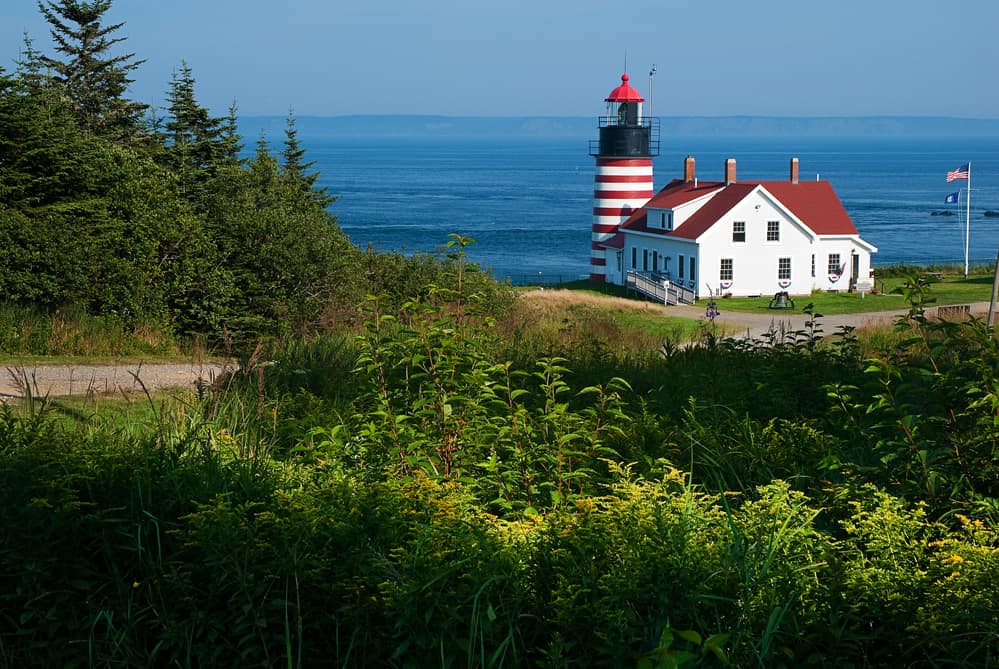 West Quoddy Head Light is pretty far out there, and many visitors to Maine don’t make it this far. In fact, this is the easternmost lighthouse in the USA and stands at the easternmost point in the United States as well. However, with its iconic red and white stripes, it’s a shame to miss it.

Well, you don’t have to! It’s just a little over a 4 hour drive from Portland to West Quoddy Head, so if you’re feeling ambitious or on a Maine road trip, add this lighthouse to your itinerary.

West Quoddy Head Light was first completed in 1808 under orders of President Thomas Jefferson, but the current tower was erected in 1858. 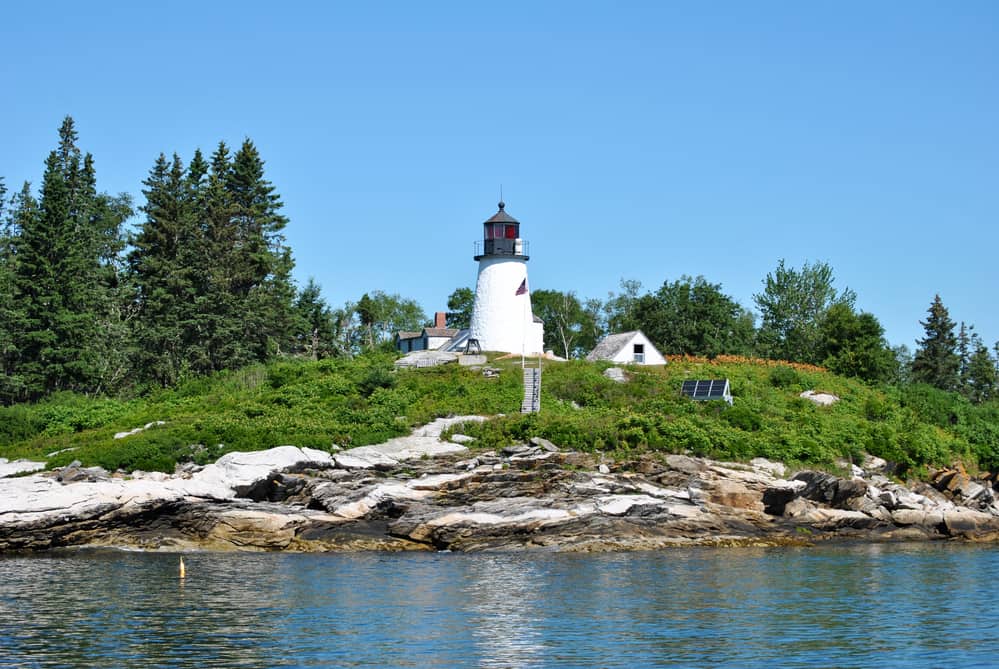 The enchanting Burnt Coat Harbor Lighthouse (sometimes called the Swan’s Island Lighthouse) is still a working lighthouse and a beacon to the local lobster boats in the area. In addition to gorgeous views of the ocean, you will find 2 miles of walking trails and access to two beaches. This is a unique and picturesque lighthouse with lots of things to do on y0ur visit, including climbing to the top of the lighthouse. And it’s all free of charge! 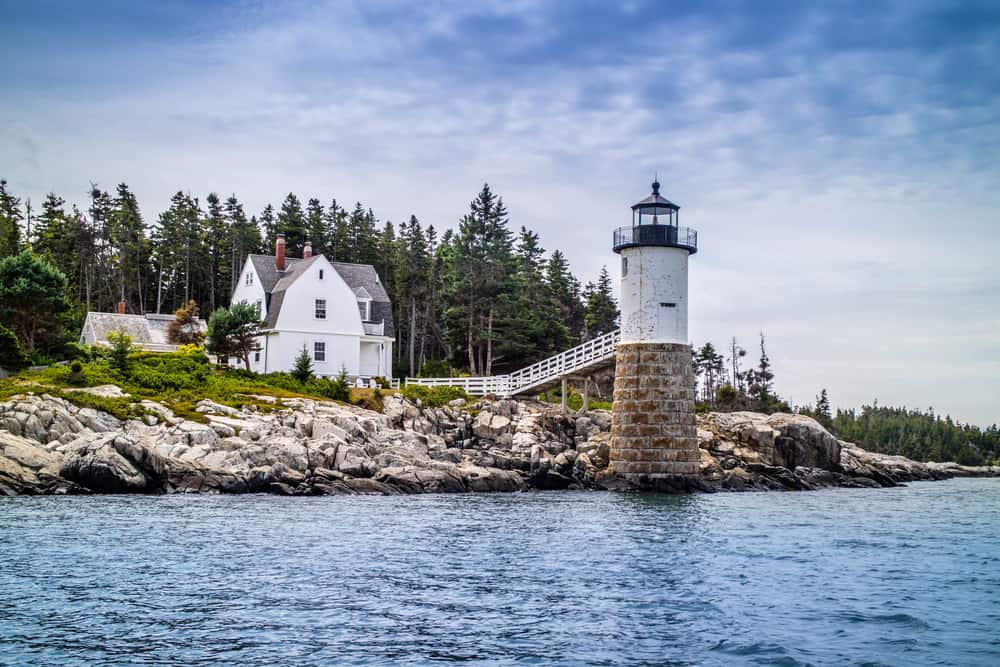 The best view of the turn-of-the-century Isle au Haut Lighthouse (also known as Robinson Point Lighthouse) is from the water! History, hiker’s trails and gorgeous views abound. Take a brief tour up to the top of the lighthouse and catwalk around it. You can visit by Mailboat, which makes daily trips in the summer, and also stop at the nearby Acadia National Park. There is lodging right next to the lighthouse, a tiny uncrowded village, and lots to explore! 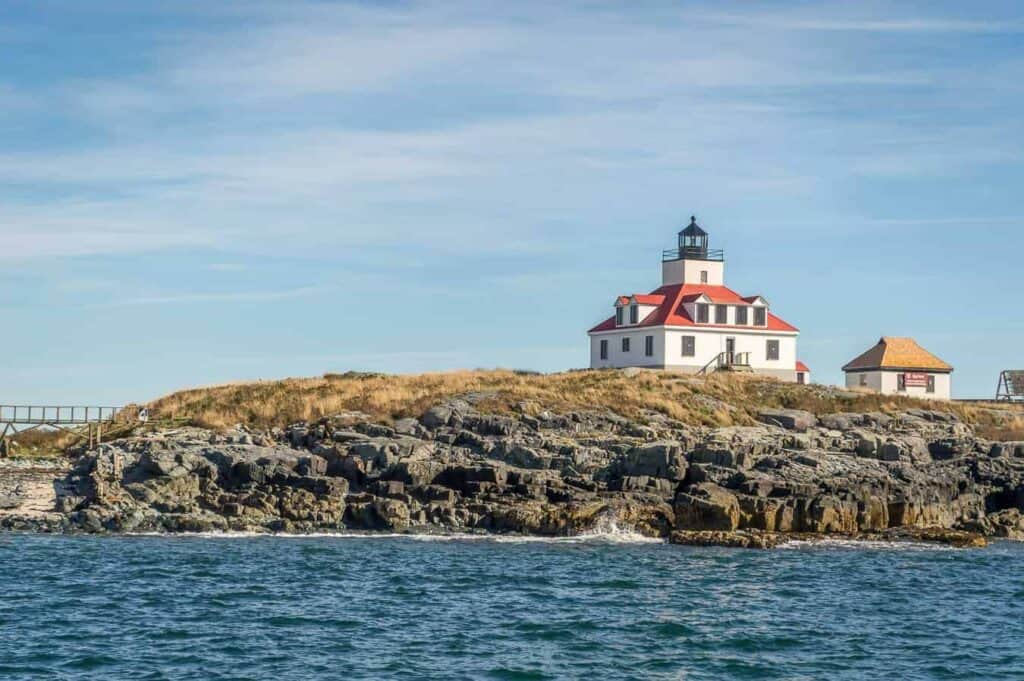 Use the map below to help you find all of these Maine lighthouses! 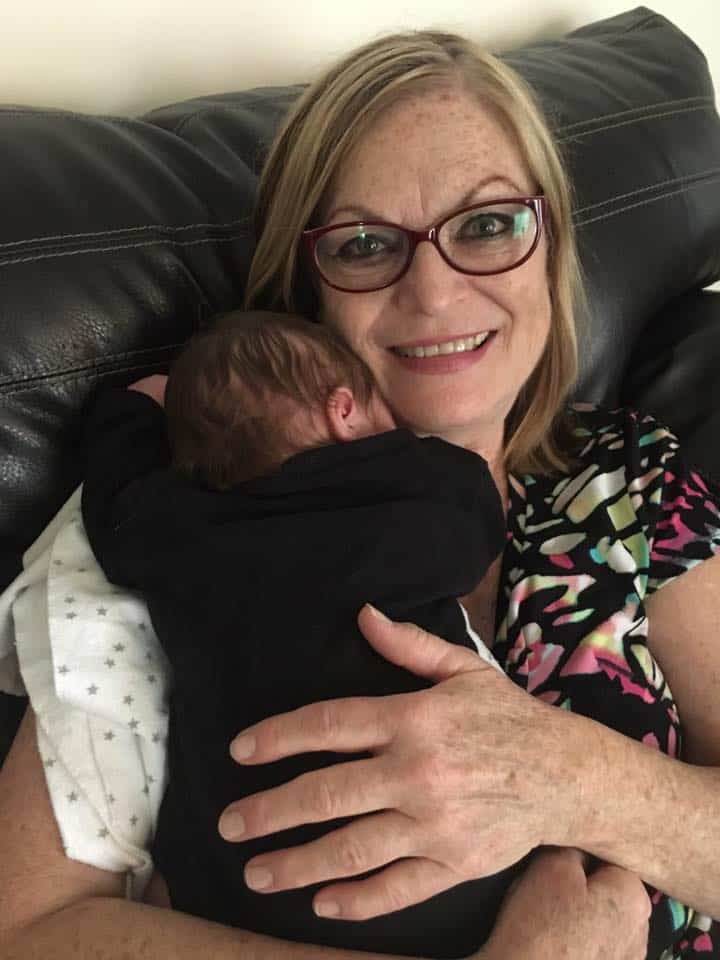 Donna Dresser is a mother of 6 as well as a grandmother of 3. She is the author of Dancing Desi and No Pickle! a look behind the scenes of a New England Deli. Donna is an artist and former librarian who lives in Vermont with her 3 youngest children. She spends her free time traveling, and has explored such places as Europe, Canada and the US. Her favorite destinations always include the beach.