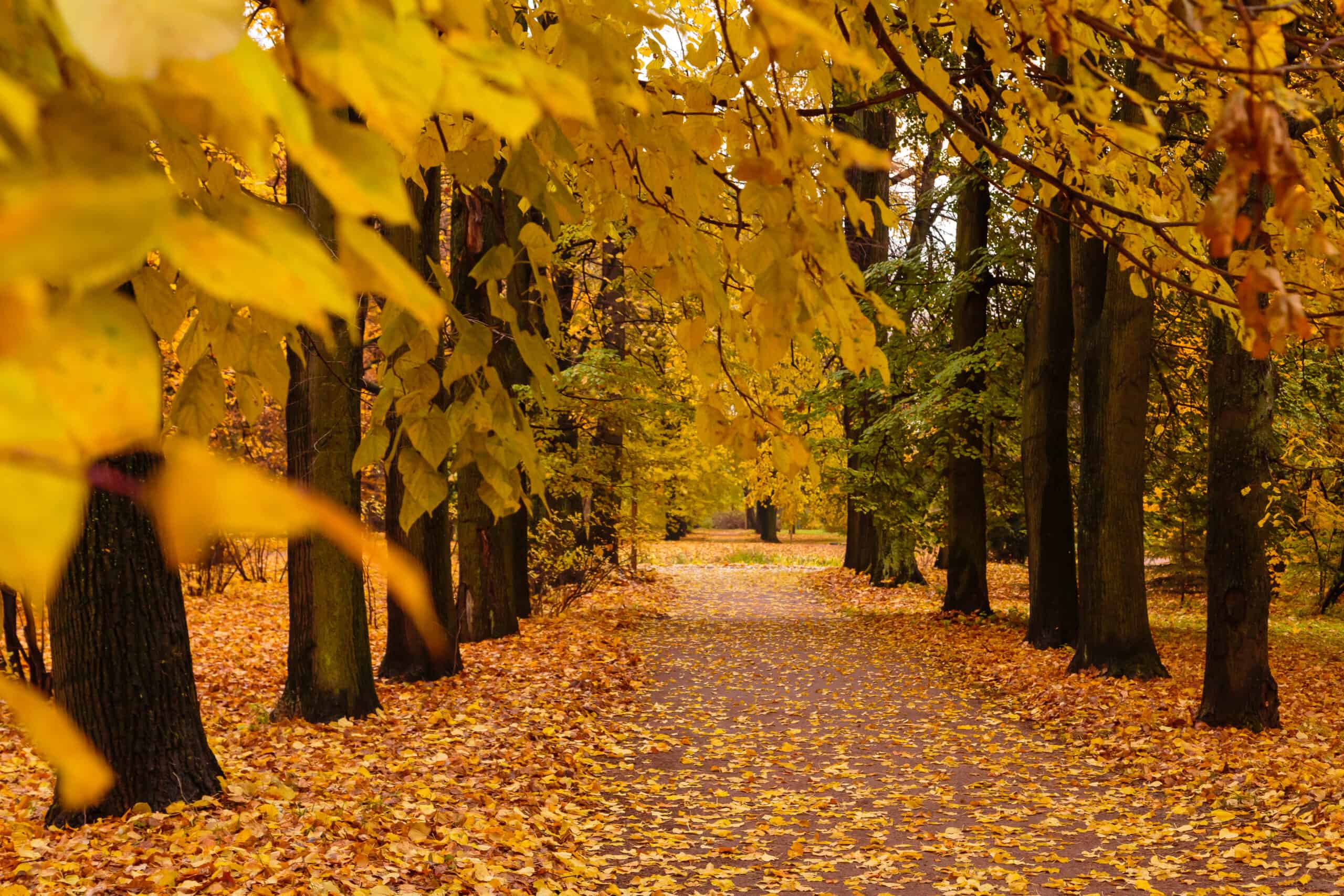 There are hundreds of beautiful autumn quotes: things that have been said, written, or composed over the years celebrating this most magical of seasons.

As the air becomes chilled and the leaves turn their golden hues, there’s nothing quite so inspiring as a quote about fall to fill you with cozy anticipation for the season.

Here, I’ve collected some of my all time favorite quotes about fall. These range from literary quotes to contemporary sayings, but every word is about the magic of autumn. Read on to find your favorite!

“Ho! for the leaves that eddy down, Crumpled yellow and withered brown, Hither and yonder and up the street And trampled under the passing feet; Swirling, billowing, drifting by, With a whisper soft and a rustling sigh, Starting aloft to windy ways, Telling the coming of bonfire days.”

“I love the autumn—that melancholy season that suits memories so well. When the trees have lost their leaves, when the sky at sunset still preserves the russet hue that fills with gold the withered grass, it is sweet to watch the final fading of the fires that until recently burnt within you.”

“The hazy, cloudless skies of Indian Summer. Leaves scurrying down the street before the wind. The cold shiver from an arctic blast. Indian Summer. The last warmth of the sun. Chilly mornings and glorious warm afternoons. The Harvest Moon. The Hunter’s Moon. The Rainy Season. Dry corn stalks clattering in the wind. The touch of frost on grass and window pane. The smell of burning leaves.”

“And all at once, summer collapsed into fall.”

“I loved autumn, the one season of the year that God seemed to have put there just for the beauty of it.”

“Autumn colors remind us we are all one dancing in the wind.”

Nothing is more fleeting than external form, which withers and alters like the flowers of the field at the appearance of autumn.

No spring nor summer beauty hath such grace, as I have seen in one autumnal face.

Besides the autumn poets sing, a few prosaic days, a little this side of the snow, and that side of the haze.

The leaves fall, the wind blows, and the farm country slowly changes from the summer cottons into its winter wools.

“It was a beautiful bright autumn day, with air like cider and a sky so blue you could drown in it.”

Autumn is a second spring when every leaf is a flower. 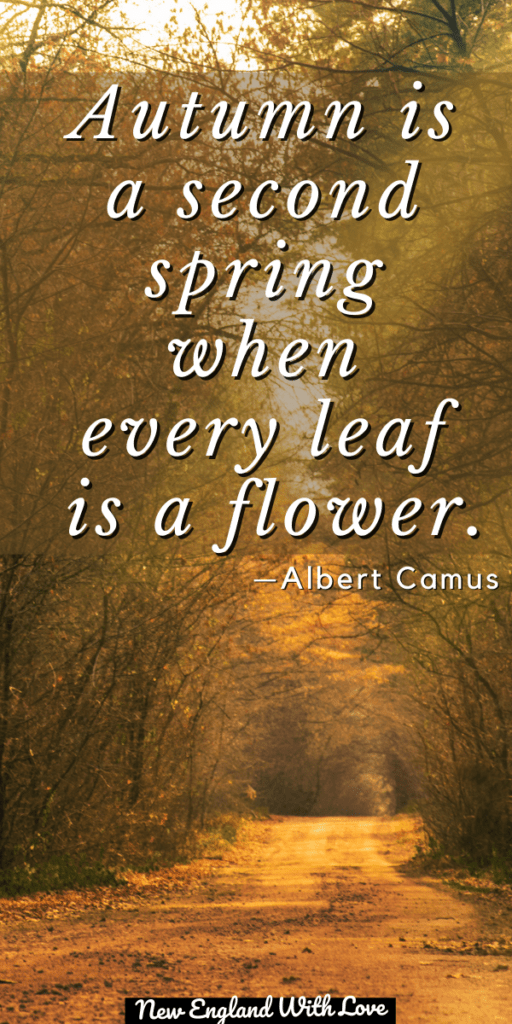 “The dust was antique spice, burnt maple leaves, a prickling blue that teemed and sifted to earth. Swarming its own shadows, the dust filtered over the tents.”

It was one of those perfect English autumnal days which occur more frequently in memory than in life.

Delicious autumn! My very soul is wedded to it, and if I were a bird I would fly about the earth seeking the successive autumns.

Autumn is the eternal corrective. It is ripeness and color and a time of maturity; but it is also breadth, and depth, and distance. What man can stand with autumn on a hilltop and fail to see the span of his world and the meaning of the rolling hills that reach to the far horizon?

I cannot endure to waste anything as precious as autumn sunshine by staying in the house. So I spend almost all the daylight hours in the open air.

Winter is an etching, spring a watercolor, summer an oil painting and autumn a mosaic of them all.

There is a harmony in autumn, and a lustre in its sky, which through the summer is not heard or seen, as if it could not be, as if it had not been!

“Two sounds of autumn are unmistakable…the hurrying rustle of crisp leaves blown along the street…by a gusty wind, and the gabble of a flock of migrating geese.”

Swinging on delicate hinges the autumn leaf almost off the stem.

“Such days of autumnal decline hold a strange mystery which adds to the gravity of all our moods.” 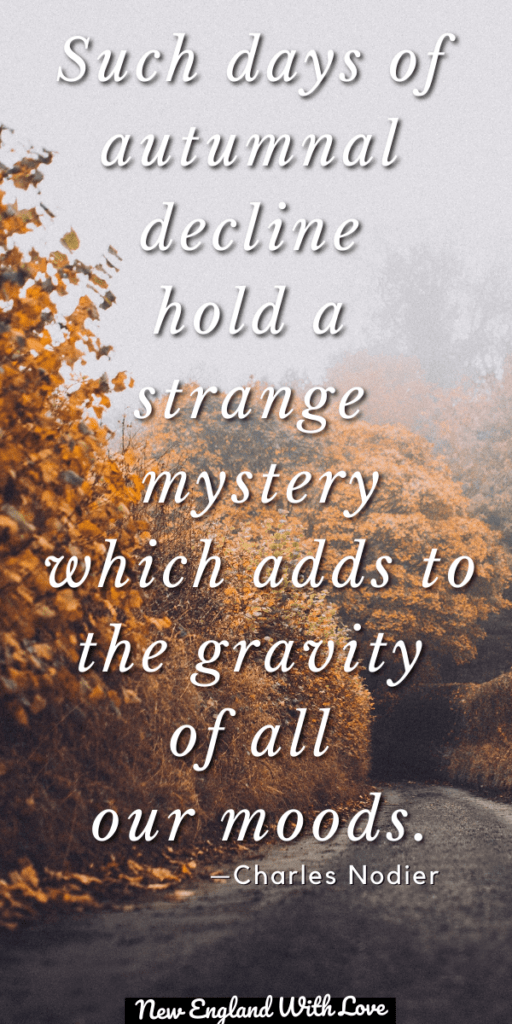 “And I rose
In a rainy autumn
And walked abroad in shower of all my days
High tide and the heron dived when I took the road
Over the border
And the gates
Of the town closed as the town awoke.”

“The goldenrod is yellow,
The corn is turning brown…
The trees in apple orchards
With fruit are bending down.”

“But you can’t plead with autumn. No. The midnight wind stalked through the woods, hooted to frighten you, swept everything away for the approaching winter, whirled the leaves.”

“A tangerine and russet cascade of kaleidoscopic leaves, creates a tapestry of autumn magic upon the emerald carpet of fading summer.”

For man, autumn is a time of harvest, of gathering together. For nature, it is a time of sowing, of scattering abroad.

By all these lovely tokens, September days are here. With summer’s best of weather and autumn’s best of cheer. 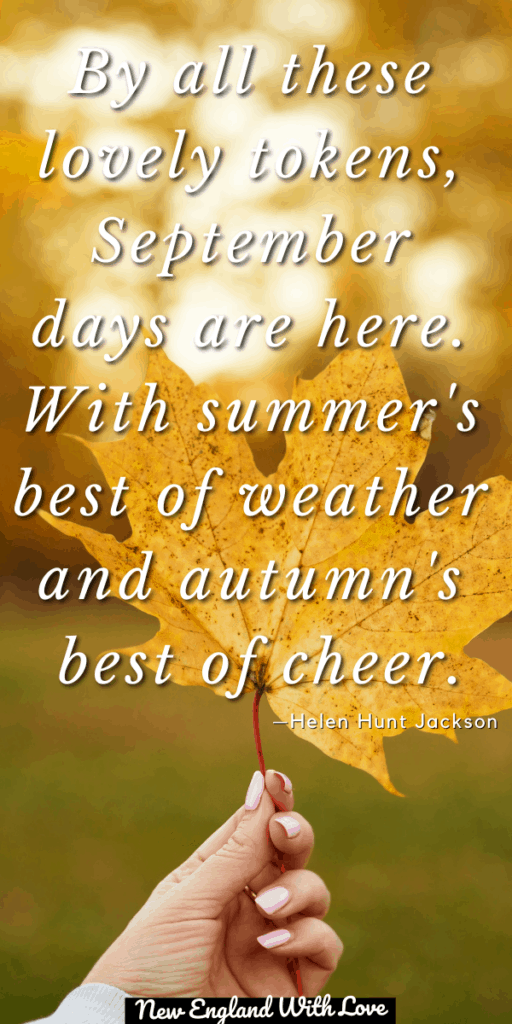 “But when fall comes, kicking summer out on its treacherous ass as it always does one day sometime after the midpoint of September, it stays awhile like an old friend that you have missed. It settles in the way an old friend will settle into your favorite chair and take out his pipe and light it and then fill the afternoon with stories of places he has been and things he has done since last he saw you.”

Through the crisp, swirling launch of our recall, memories smile at yesterday’s replay. September guides us gently into Fall, when woods begin to hear chill winter’s call.

“[T]hat old September feeling, left over from school days, of summer passing, vacation nearly done, obligations gathering, books and football in the air … Another fall, another turned page: there was something of jubilee in that annual autumnal beginning, as if last year’s mistakes had been wiped clean by summer.”

“for all I can really do is
stand here
in September’s rain
savoring…
soaking it all in
slipping..
and simply
holding on to poetry
for dear life.”

“Autumn seemed to arrive suddenly that year. The morning of the first September was crisp and golden as an apple.”

“Outside the leaves on the trees constricted slightly; they were the deep done green of the beginning of autumn. It was a Sunday in September. There would only be four. The clouds were high and the swallows would be here for another month or so before they left for the south before they returned again next summer.”

“Ah, September! You are the doorway to the season that awakens my soul… but I must confess that I love you only because you are a prelude to my beloved October.”

Listen! the wind is rising, and the air is wild with leaves, we have had our summer evenings, now for October eves! 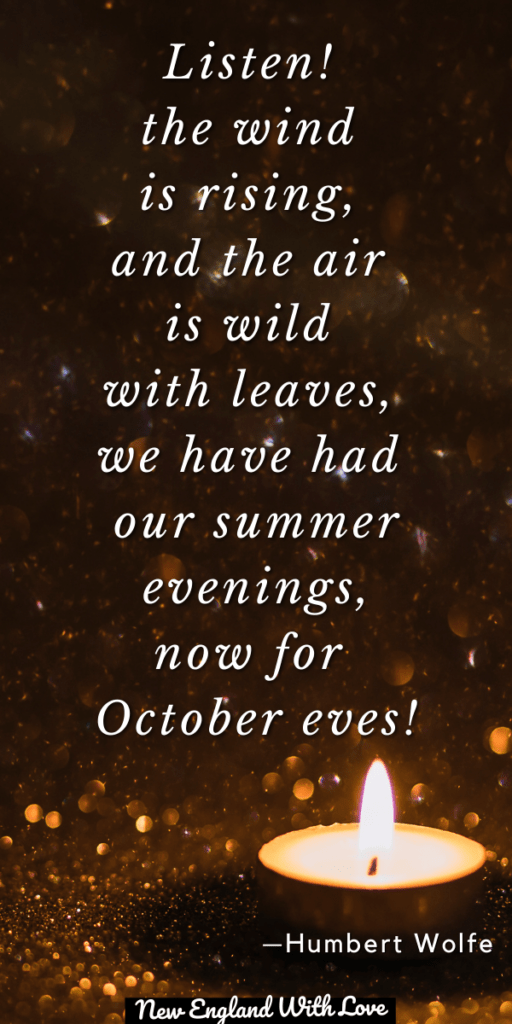 “October’s poplars are flaming torches lighting the way to winter.”

“October was always the least dependable of months … full of ghosts and shadows.”

Bittersweet October. The mellow, messy, leaf-kicking, perfect pause between the opposing miseries of summer and winter.

“After the keen still days of September, the October sun filled the world with mellow warmth…The maple tree in front of the doorstep burned like a gigantic red torch. The oaks along the roadway glowed yellow and bronze. The fields stretched like a carpet of jewels, emerald and topaz and garnet. Everywhere she walked the color shouted and sang around her…In October any wonderful unexpected thing might be possible.”

“May you Fall in love with October
and all the beauty it brings,
May your life be as colorful as
the turning of the leaves,
On each blessed autumn day”

Then summer fades and passes and October comes. We’ll smell smoke then, and feel an unexpected sharpness, a thrill of nervousness, swift elation, a sense of sadness and departure.

“I’m so glad I live in a world where there are Octobers.” 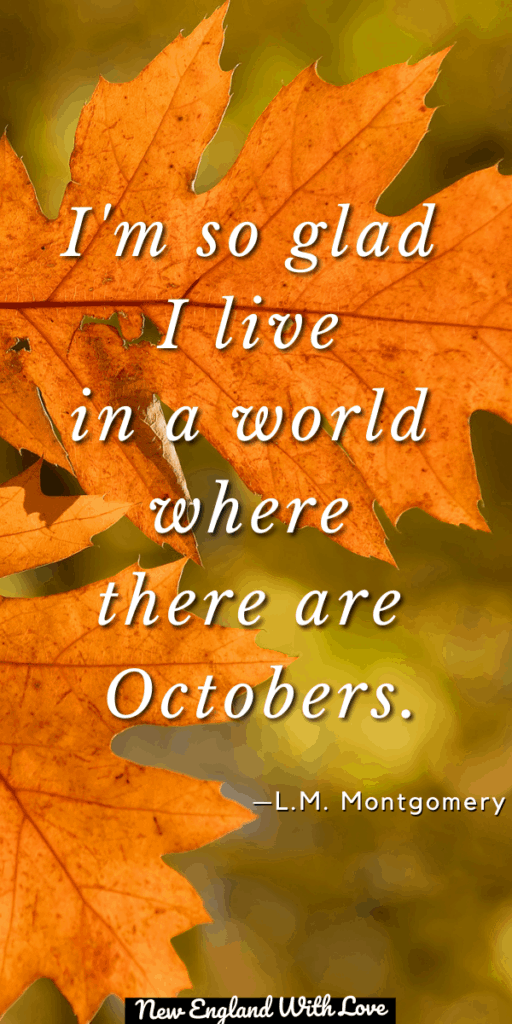 “Ah, Lovely October, as you usher in the season that awakens my soul, your awesome beauty compels my spirit to soar like an leaf caught in an autumn breeze and my heart to sing like a heavenly choir.”

“October had tremendous possibility. The summer’s oppressive heat was a distant memory, and the golden leaves promised a world full of beautiful adventures. They made me believe in miracles.”

“There is something in October sets the gypsy blood astir: We must rise and follow her, When from every hill of flame, She calls, and calls each vagabond by name.”

“November comes
And November goes,
With the last red berries
And the first white snows.

With night coming early,
And dawn coming late,
And ice in the bucket
And frost by the gate.

The fires burn
And the kettles sing,
And earth sinks to rest
Until next spring.”

The wind that makes music in November corn is in a hurry. The stalks hum, the loose husks whisk skyward in half-playing swirls, and the wind hurries on…. A tree tries to argue, bare limbs waving, but there is no detaining the wind.

“But there is always a November space after the leaves have fallen when she felt it was almost indecent to intrude on the woods…for their glory terrestrial had departed and their glory celestial of spirit and purity and whiteness had not yet come upon them.”

“The house was very quiet, and the fog—we are in November now—pressed against the windows like an excluded ghost.”

“In November, the trees are standing all sticks and bones. Without their leaves, how lovely they are, spreading their arms like dancers. They know it is time to be still.”

“This November there seems to be nothing to say.”

“November always seemed to me the Norway of the year.” 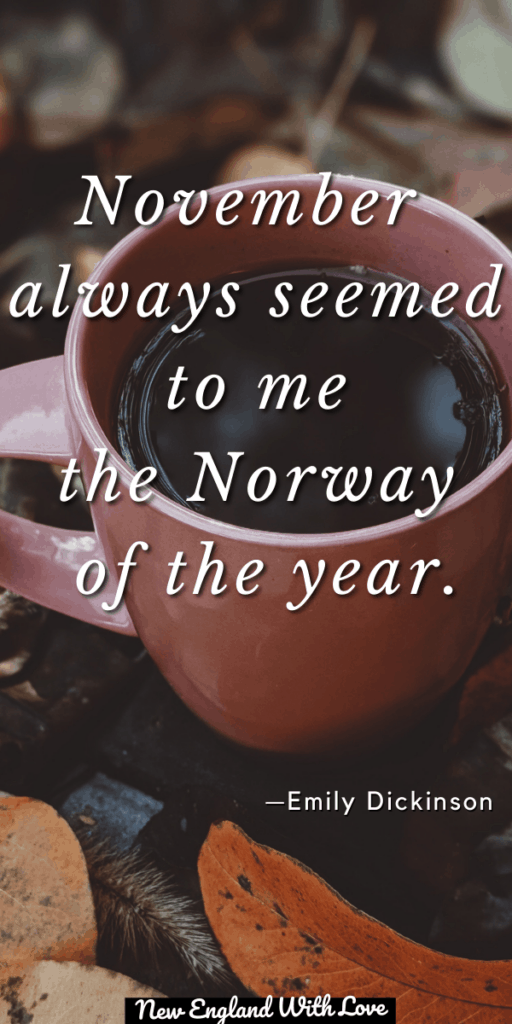 “November at its best – with a sort of delightful menace in the air.”

“November–with uncanny witchery in its changed trees. With murky red sunsets flaming in smoky crimson behind the westering hills. With dear days when the austere woods were beautiful and gracious in a dignified serenity of folded hands and closed eyes–days full of a fine, pale sunshine that sifted through the late, leafless gold of the juniper-trees and glimmered among the grey beeches, lighting up evergreen banks of moss and washing the colonnades of the pines. Days with a high-sprung sky of flawless turquoise. Days when an exquisite melancholy seemed to hang over the landscape and dream about the lake. But days, too, of the wild blackness of great autumn storms, followed by dank, wet, streaming nights when there was witch-laughter in the pines and fitful moans among the mainland trees. What cared they? Old Tom had built his roof well, and his chimney drew.”

“It was getting dark by the time I went out, and nobody who knows the country will need to be told how black is the darkness of a November night under high laurel bushes and yew-trees. I walked into the heart of the shrubberies two or three times, not seeing a step before me, till I came out upon the broader carriage-road, where the trees opened a little, and there was a faint grey glimmer of sky visible, under which the great limes and elms stood darkling like ghosts; but it grew black again as I approached the corner where the ruins lay.”